The final voyage of the USNS H. H. Hess

My first ship, the USNS H. H. Hess, is currently enroute to Brownsville, TX where it will be cut up into scrap metal and recycled.  The Hess was an oceanographic survey vessel that was operated by the Military Sealift Command from roughly 1978-1992.  The ship was originally built in 1965 as the SS Canada Mail,  a C4 Mariner class cargo ship that was operated by American Mail Lines.  The ship was converted into it’s survey role in 1976.

In its time it was the worlds largest floating data center with all sorts of cool computers and electronic instrumentation.   It performed bathymetric, magnetic field, and gravity surveys in support of the Navy’s FBM program.  The crew consisted of roughly 40 civilian mariners, 10 oceanographers, two commissioned naval officers, 18 enlisted Navy technicians, and several of defense contractor represenatives.

The ship was big, comfortable and well-appointed.  There were three dining rooms, two libraries, a conference room that doubled as a movie theater, nice staterooms, a workout room, a crew’s lounge and a large basketball court.   My favorite parts of the ship were the electronics shop – I pretty much had it to myself and built my first Z80-based computer there – and the bow, which offered sun, fresh air, and quiet solitude – a great place to study and contemplate life.

The photo below is a webcam capture that shows the Hess entering the Gatun locks of the Panama Canal on 2/18/2011. 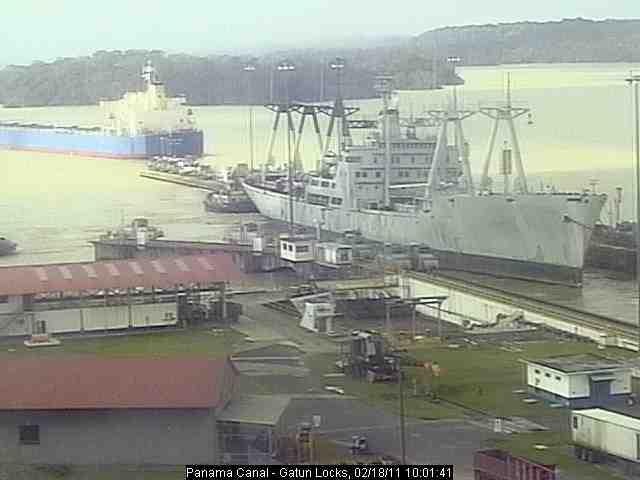 This entry was posted in Personal. Bookmark the permalink.

2 Responses to The final voyage of the USNS H. H. Hess