I have a lab that includes:

Items two through six are hosted on a Hyper-V server, while everything else is on standalone hardware.  Item seven us useful for testing network connections between geographically isolated data centers.

Until today I was having issues finding a way to realistically simulate network outages between availability group nodes, since they reside within the same Hyper-V host.  Finally today something in my dim little brain clicked.  All I had to do was bind each of the nodes in my availability group to is own physical network interface.

To accomplish this I found a couple of spare, dual Ethernet NICs, installed them the Hyper-V Host, and connected each port to the (physical) desktop switch. From there I booted the server, went into Virtual Switch Manager, and created  three virtual switches, one for each port.  After that I selected two guest OS instances for modification.  On each instance I removed the existing network adapters and created a new network adapter tied to one of the new virtual switches.  Here is a simplified drawing of the layout: 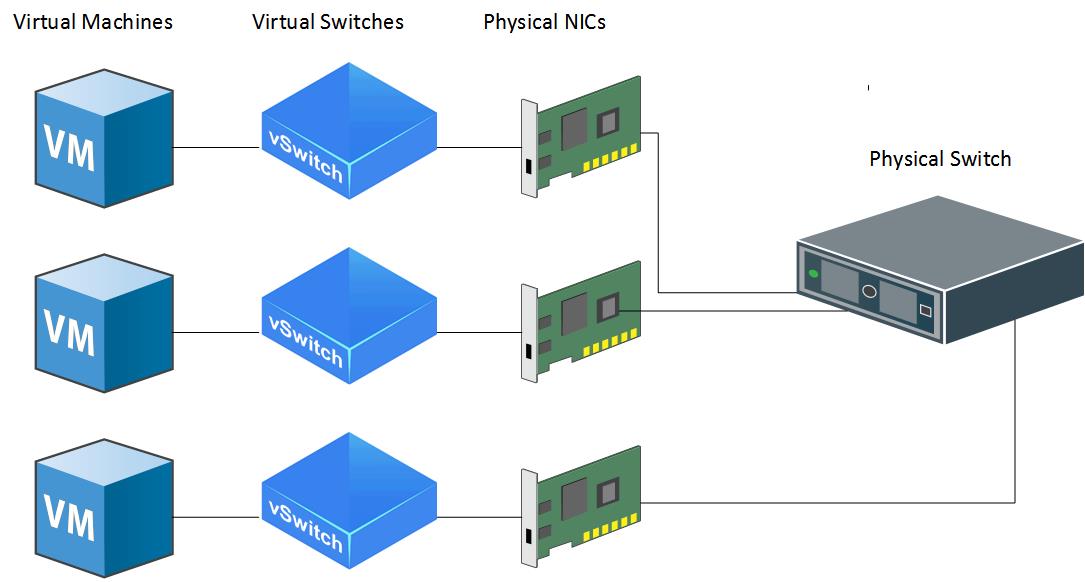 With this new configuration, creating a network outage is as simple as disconnecting a network cable.  With two cables disconnected on a majority-node, three-node cluster, I was able to lose quorum (as expected) and watch the availability group role shut down as expected.  Restoring network connectivity produced the expected behavior.  Alternately, I was able to use failed quorum scenario to perform a forced quorum recovery.

This entry was posted in AlwaysOn, SQL Server and tagged AlwaysOn, lab, testing. Bookmark the permalink.